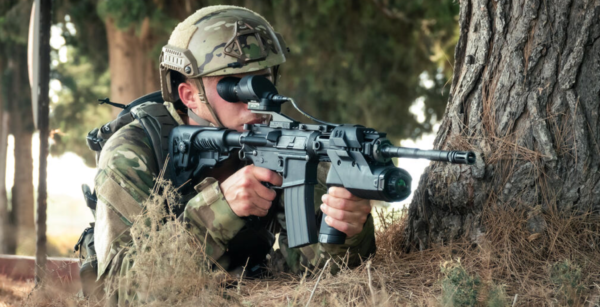 The ARCAS weapon system can detect enemies on the run, mark, and lock in on them, so the soldier could easily detect them, a critical component of urban warfare. The system also allows browsing through pictures it captured and gives live updates on the status of the weapon and its ammo, through interfaces with the rifle’s Electro-Optical (EO) sight, with a helmet mounted eyepiece, providing soldiers with real-time intuitive actionable combat information.

Elbit says ARCAS, which is dubbed a “smartphone for soldiers”, can be installed on any common assault rifle, such as the M-16 or Israeli IWI Tavor. 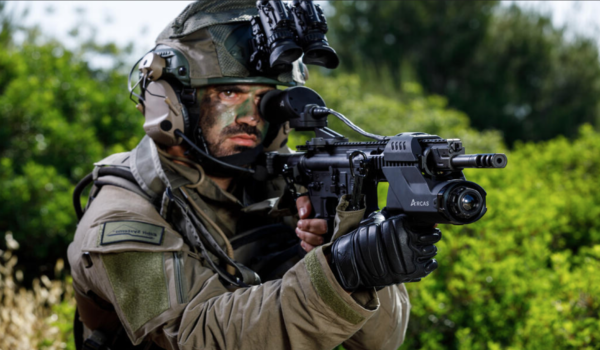 An AI-powered computer is integrated into the assault rifle’s forward grip, running innovative software and a range of applications for range measurement, automatic ballistic correction, detection of fire sources, video motion detection, the ability to shoot around the corner and from the hip, interface with tactical Command and Control (C2), navigation assistance, friend or foe identification, tracking of stoppage and ammunition and weapon zeroing without the need for live fire.

“The system’s camera is effective for day and night, and even for a hermetic dark area like a tunnel,” Elbit explained. “The camera lens can adjust, so the soldier could see the battlefield through the corners of the buildings from aside without being exposed and risk getting shot, and he can also shoot without seeing the enemy directly.”

The weapon systems are linked by wireless or Wi-Fi communication and can transfer data, in order to create a full combat image to all forces in the arena.

“The system can also detect only parts of the body if they are exposed for a short time, and it is customized for any type of combatant, whether using an assault rifle, a machine gun, or any other common infantry weapon.”

Another advantage of the new system, which the Israel Defense Forces and foreign armies have expressed a great interest in the new system not least of all, because of its ability to save time and ammunition.

“There are already security agencies that test our system after we finished the first successful prototype,” said Elbit.

“This is part of our smart-aim project, the ‘Macabit’, which is already in use by the IDF and has proven operational success this year.

The new system will weigh some 150 grams, which will not overload the soldier, and it can be installed as a kit on each rifle as easily as you insert and remove a weapon’s magazine.”