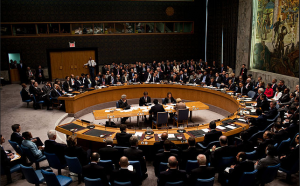 To win the seat, Prime Minister Benjamin Netanyahu, who also serves as Israel’s foreign minister, and Israel’s entire diplomatic establishment, would have to launch an aggressive campaign and meet with foreign dignitaries. Such a campaign has yet to be launched and sources in the Foreign Ministry say the chances of being selected have significantly decreased because the process will have begun so late.

Previously, between 1949 and 2000, Israel belonged to the Asia-Pacific Group, where an Arab majority automatically opposed any effort on Israel’s behalf to serving on the council. In 2000, the U.N. agreed to shift Israel into the Western Europe and Other Group, allowing it to vie for one of the two spots reserved on the council for the bloc.

Germany and Belgium are currently vying for a seat against Israel. These countries rejected diplomatic efforts by Israeli representatives asking that they withdraw their candidacy. To win a seat, a country must receive at least two-thirds of the votes in the U.N. General Assembly, an unlikely prospect considering the assembly suffers a known anti-Israel bias spearheaded by the Palestinians and backed by the Arab League.

Israel has not officially announced its withdrawal and according to a senior official familiar with the matter, Netanyahu has not yet finalized his decision on the matter. But the Foreign Ministry has expressed a wish to quit the race because of the improbability of a win.