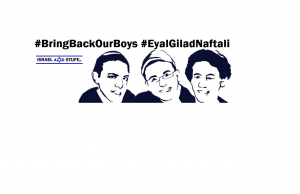 The kidnap & murder of 3 Jewish teenage boys by Palestinians in June 2014 inspired 16 year old Amit Saban to develop a “smart” dog tag, which transmits ID & location to authorities when activated.

A teenager from Ramat Hasharon has recently launched a startup that makes “smart” ID tags with built-in GPS technology that can help soldiers and civilians in distress, and even prevent abductions.

“The tag I invented contains a chip with GPS, so if a soldier is in trouble he presses [the tag] and his information and location are sent via a computer program to the IDF and his parents,” Amit Saban, 16, explains to Israel Hayom.

Amit Saban, 16, holds up the prototype of his “smart” dog tag – Photo: KOKO

“I currently have a prototype of the smart ID tag that I can show to the public,” Saban says.

How did he come up with the idea for the tag?

“When you launch a startup, you usually think about [making] big money, but my goal was to save Israeli lives, because that’s ‘an entire universe.’ I saw the three yeshiva students [Gil-ad Shaer, Naftali Fraenkel and Eyal Yifrach], and my heart ached. After that I felt that I had to take action and think of an initiative that would save lives, both civilians and soldiers,” Saban said.

Saban is an outstanding high school scholar and a member of the gifted students’ program at Tel Aviv University. His smart ID tag earned him first place in a youth startup competition sponsored by Google. He has reached out to Prime Minister Benjamin Netanyahu and Defense Minister Moshe Ya’alon with news of his invention.

“They told me they were very excited by my idea and would give me an answer soon,” Saban says proudly.

As if all this weren’t enough, Saban and four of his friends recently founded a nonprofit association that advocates for youth rights in Israel.

“I founded the group because I, like a lot of other young people, have been cursed at, bullied and excluded. Our goal is for every kid who is hurt in school, whether by a friend or another student, a teacher, or even the principal, to send us a complaint, which we pass along to the relevant authorities, like the Education Ministry. We’ve already taken care of 25 complaints from students from all over Israel,” he says.

How does he manage it all?

“I believe that nothing is stronger than your will. I’ve gone through tough things in my life, and in spite of everything, I’ve managed to meet the goals I set for myself. We can’t give up on our dreams and the things we love to do,” he answers.