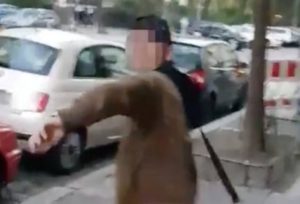 The event took on special significance amid concerns that anti-Semitism could be on the rise in Germany.

Police said on Wednesday that they had launched an investigation after two men wearing traditional kippot were attacked and insulted in Berlin on Tuesday. A video emerged showing two men, aged 21 and 24, allegedly being attacked by three people, one of them wielding a belt. One of the three attackers also tried to hit the man with a glass bottle. A female witness placed herself between them and prevented any further violence.

In an interview with German media on Wednesday, the victim of the attack, Adam Armoush, explained he was not Jewish. He called himself an “Israeli raised in an Arab family” and said he had filmed the attack for the German police and for the German people, “and even for the world, so they can see how terrible it is to be a Jew in the streets of Berlin.”

Following the attack, German Chancellor Angela Merkel on Wednesday condemned anti-Semitism in Germany and said the government would do everything in its power to defeat it.

The chancellor added that the country’s Central Council of Jews had provided study material on anti-Semitism for use in classrooms.

Meanwhile, one suspected perpetrator of Tuesday’s attack has turned himself in.

A police spokeswoman said the 19-year-old suspect was a Syrian citizen and had turned himself in at around noon, accompanied by his lawyer.

“At the request of the public prosecutor’s office in Berlin, he will appear in front of an investigating judge who will decide on issuing an arrest warrant,” the spokeswoman added.