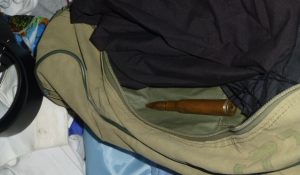 “R.” was flying to India via Moscow and was detained at the New Delhi airport on her way to Dharamshala. She was going though the security check before her connecting flight when a bullet was found that she had apparently forgotten about from her IDF service.

Her father contacted the Ministry of Foreign Affairs’ situation room for Israelis abroad, and they contacted the Israeli consul in New Delhi, Ziv Bilaus, and he managed to prevent an indictment being filed against her.

Though R. avoided arrest, she was required to remain in New Delhi for a time until the completion of the legal proceedings, at which time she continued on to Dharamshala.Another young Israeli who had recently completed his IDF service was detained at the Taba Crossing in similar circumstances. Generally, the Egyptian authorities consider carrying ammunition to be serious, but the intervention of the Israeli consul in Cairo, Yehuda Golan, led to his release after a few days of detention and paying a small fee, all on account of one M-16 bullet that he had forgotten in his bag.