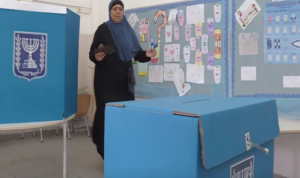 Yoseph Haddad, a Christian Arab Israeli and wounded IDF veteran is appealing in an open letter to all Arab citizens in Israel not to vote for the United Arab List next week, but to go out and elect representatives “who will work with us in the Knesset for the next 4 years.”

“Our (Arab) society is in bad shape,” Haddad says in his address to the nation’s Arab citizens. “Most of us are in a difficult social situation. Violence is widespread in Arab cities and societies. We have burning and disturbing problems in crime, education and infrastructure.”

Yoseph Haddad served in the elite IDF Golani brigade before suffering an injury and now serves as CEO of “Committed Together – Jew and Arab.” – Photo: Ynet [unattributed]

Haddad goes on to point out that the Arab Knesset members are to blame for the poor living conditions of many Arab citizens in Israel. “They got a chance time after time, and the result – a big failure. They do not care about us; they are only involved in the provocations promoting the Palestinian cause. They resist any opportunity that could lead to integrating our (Arab and Jewish) sectors.”

Many Arab Israelis are fed up with the pro-Palestinian rhetoric fed them by their representatives in the Israeli government, and want their ministers to focus on improving social services, education and the economy of the Arab sector. “In recent years, while Arab Knesset members visited the (pro-Hamas) Gaza Flotilla, smuggled mobile phones to terror-related security prisoners, demanded support of the boycott of Israel around the world and supported terrorists with blood with their hands – we are the ones who paid the price,” Haddad points out.

Haddad’s appeal is gaining traction among growing numbers of Israeli Arabs who oppose the unrealistic and violent Palestinian nationalistic demands and want to enjoy their full-fledged Israeli citizenship. “In this election,” Haddad pleads, “we must not support the United Arab List, we must not fall into their trap again!”

“It’s time to make the Arab List understand that they do not represent us,” Haddad continues. “We must not vote for any of their leaders. It is time to reason and start building the bridges that will lead to a united society (of Jew and Arab) in the state of Israel, in our home.”

Haddad says that while no Arab should vote for these anti-Israel politicians, it is important to go out and vote. If they are unfamiliar or unable to choose a Jewish candidate, they should put a blank white slip in ballot box in protest against the Arab politicians.

In the most recent polling, the United Arab List is the third largest party in Israel only after Netanyahu’s Likud and the opposition Blue and White party.