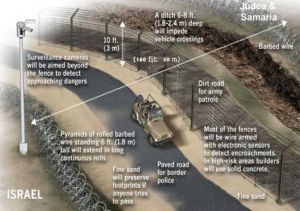 Elta North America, the aforementioned IAI subsidiary, was announced Saturday as one of only four companies to construct a prototype for a “smart border” wall, after winning a US Customs tender. More than 200 companies from around the world presented bids for the tender.

Each one of the quartet of companies will receive funding of $300,000-$500,000 to finance the production of said prototype in the coming fall.

Trump wishes to create a wall running the entire 3,200 kilometers separating the two countries, in order to prevent passage of migrants from Mexico into the US, who he says take jobs out of American hands.

After Trump cited Israel’s wall built along its southern border with Egypt as a success story in stopping illegal migrants from entering the country, Prime Minister Benjamin Netanyahu voiced his support for the US border wall project. Netanyahu’s reply got him into some hot water with both Mexico and members of his own coalition, who pleaded with him to stay out of the controversial issue.

The project is estimated to become one of the world’s largest security infrastructure undertakings, with its cost to run anywhere from 15 to 25 billion dollars.

The American government has so far earmarked 3 billion dollars for the project in its 2018 budget, of which a billion will go to the smart border systems included in the tender, which are supposed to include advanced radars for both person and vehicle identification. Radars of this type are already manufactured by Elta and sold to the Israeli Ministry of Defense, as well as to other international clients.

Elta North America works out of Maryland and manufactures radar systems and components for branches of the American military, as well as radar components that the Israeli Ministry of Defense purchases using funding it receives from the US for Israel’s security. The security package does stipulate, however, that Israel must purchase equipment intended to fortify its security from that has been manufactured in the US—a fact that allows Israel to purchase Elta’s products, despite the company being a subsidiary of the Israel Aerospace Industries.

Elta employs 50 people and is expected to double its manpower in the coming years. It also operates in cyber and has opened a training and instruction center for cyber professionals working for both governmental and private organizations.

Elta’s Israeli headquarters are located in Ashdod, where it manufactures radar systems for Arrow missiles, the Iron Dome system, espionage and fighter jets.

The company is also in the running to supply additional long-range radars to South Korea, which has already purchased the “Green Pine” radar used in the Arrow missiles from Elta. South Korea is interested in purchasing radar systems to beef up its deterrent array in light of rising tensions in the Korean peninsula.