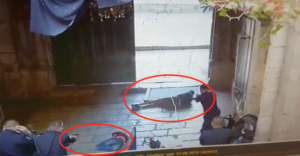 Stabbing attack in JLM today: two terrorists stabbed an officer stationed next to one of the old city gateways. Nearby @IL_police forces shot and neutralized the attackers. The officer suffered minor injuries. The circumstances of the attack are being investigated pic.twitter.com/sJPj2h99h1

All entries and exists to the Old City were closed following the attack.

A police statement said that the two Palestinians were underage, and that one more person who was in the vicinity of the event was wounded in his leg and evacuated to a hospital.

The Shaare Zedek Medical Center in Jerusalem said that the policeman was stabbed in his upper body and has been sent to further examinations and treatment.

The injured from the Palestinian terror attack are being evacuated to a hospital – Photo: Courtesy of MDA

“When we reached the scene, we saw a man who was fully conscious. He had stabbing wounds. We gave him emergency care that included stopping the bleeding and bandaging, and evacuated him to a hospital with light wounds,” said Moshe Cordova, and MDA paramedic.”

BREAKING VIDEO: 2 Palestinian terrorists attempted to carry out a stabbing attack on Israeli police officers in the Old City of Jerusalem. 1 officer was stabbed by his shoulder and is in light-to-moderate condition.#Israel pic.twitter.com/tuwErAcYXO