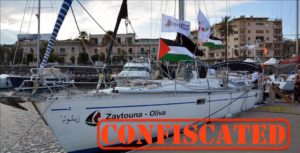 The Haifa District Attorney’s Office announced the decision on Wednesday in which Deputy Haifa Court President Ron Sokol had, earlier in the week, approved the state’s request to seize the Zaytouna-Oliva ship which sailed in a September 2016 “women’s flotilla” to break the blockade.

The Zaytouna-Oliva was taken over by the IDF in October 2016 with the state maintaining a blockade of Gaza for over a decade, saying it has a right to do so under international law because of the ongoing state of war with Hamas which runs Gaza.

Although the state has tried this move before, previously the same judge, Judge Sokol, had rejected a confiscation request and its rejection was upheld by the Supreme Court.

In August 2016, the Supreme Court rejected the state’s attempt to confiscate the ship SV Estelle which was used in a 2012 flotilla.

The basis of the rejection had been that the state took 10 months before applying to confiscate the ship, a delay which the court viewed as creating injustice.

However, the three justices: Supreme Court President Miriam Naor, Hanan Melcer and Salim Joubran, had left open in August 2016 the possibility of confiscating ships in the future if  the same delays and other mistakes were avoided.

The theoretical basis for confiscating the Estelle and other boats would be the international law of the sea as embodied by England’s Naval Prize Act of 1864.

In light of the Supreme Court’s essential endorsement of confiscation and the state making sure that in this case it moved to seize the ship in a reasonable amount of time, Sokol granted the confiscation.