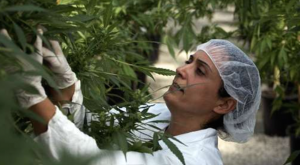 Many see the potential of medical marijuana, arguing it could be more lucrative to Israel than the newly found natural gas fields.

Israel is busy sorting out regulation for offshore natural gas reserves that are expected to be a boon for the local economy, while some argue that medical cannabis offers the Jewish state an even bigger financial opportunity.

Earlier this month, the Israel Loss Adjusters Association (ILAA) held a conference to discuss how Israel’s farmers could benefit from the growing global market for medical cannabis.

“The US cannabis market stands at $35 billion a year,” noted ILAA Chairman Doron Havkin. “Are we able to give up revenues from this market?”

Havkin argued that the government could help the stumbling agricultural sector in the arid Arava Valley in southern Israel by declaring it a closed zone for growing export-oriented medical cannabis. The nearly 6,000 acres of land, he said, were waiting for such a development.

Dr. Tamir Gadot, CEO of pro-medical cannabis agricultural association Breath of Life, explained that if Israel grew pot instead of peppers, the economy would be the biggest beneficiary.

“The economic potential of growing Big Cannabis is greater than that of [natural] gas,” he said.

Ernst and Young estimated the economic worth of Israel’s gas reserves at $52 billion. Israel’s agricultural exports currently amount to around $2.5 billion, primarily in the sale of flowers and oranges. But medical marijuana would sell for much more, and could outstrip natural gas exports in a matter of 10 years.

Amos Regev, an ILAA’s appraiser, warned that if Israel did not take action soon, it would missing the boat on medical cannabis. “If we don’t do this, somebody else will do it instead of us.”

There is also a growing local market.

Last month, Deputy Health Minister Yaakov Litzman announced that medical marijuana will eventually be available at regular Israeli pharmacies for patients with a doctor’s prescription like any other drug; and the number of physicians who are authorized to prescribe cannabis to patients would increase.

“Today there are about 20,000 patients in Israel and almost everyone has a relative who because of their medical situation needed cannabis,” said Aharon Lutzky, CEO of Tikun Olam, the largest grower of medical marijuana in Israel. “In Israel there is a potential for 100,000 consumers.”

Still, recreational use and the private growing of marijuana remains illegal in Israel.

Three men were arrested last week after being caught growing marijuana in a cemetery in central Israel. The suspects told police that they did not know anything about the marijuana and were in the cemetery to volunteer to clean up gravestones.