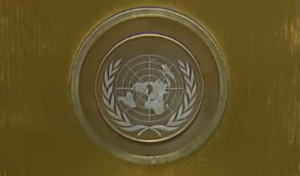 • Israel’s gov’t says it is in contact with UN officials to resolve the issue of illegal construction on government land.
• Regavim attorney: UN’s immunity is not for “the theft of land from the country that hosts him free of charge.”

After repeated delays, the state finally responded Sunday to the request for an interim injunction filed by Regavim against the illegal construction carried out by the UN at the Government House in the Armon Hanatziv neighborhood.

The state admitted for the first time that the extensive construction activity there, including works to preserve the historic buildings in the compound, as well as the construction of additional illegal structures in the compound, were carried out without permits. “The planning and building laws of the State of Israel apply to the compound and to the works that are the object of the petition, and the UN is expected to act in accordance with the principles of the relevant planning and building laws.”

View from the south of the ‘Government House’ in the Armon Hanatziv neighborhood – Photo: Regavim

In a petition submitted by the Regavim movement to the Jerusalem District Court two months ago, it was revealed that the United Nations had committed a large number of building offenses during the past year, in a site registered in the Land Registry in the name of the State of Israel.

The state expressed its opposition to issuing an interim injunction prohibiting continued construction of the compound, since the UN enjoys immunity from prosecution and legal action against it.

The State noted that “if there are differences between the State of Israel and the United Nations on this issue, they should be brought to a solution through diplomatic channels” and detailed the contacts held by the Foreign Ministry over the past few weeks with relevant UN officials in Israel and New York.

In this context, the State announced that it did not object to Regavim’s request to include the Israeli construction companies involved in the illegal construction activity as respondents to the petition.

“In addition to all this, the State is working through the diplomatic channels with the aim of resolving the issue of construction in all its aspects, including setting an outline with the UN regarding existing construction and future construction, as far as the UN will do. This dialogue is in favor of regulating the issue. ”

Regavim responded to the state’s position by stating that violations of the law must be dealt with, without delay. “Illegal work must be stopped immediately, even by means of an order against the Israeli companies that are actually carrying out the building violations while the law is in place,” said attorney Avi Segal of the Regavim movement.

“The claim that the UN has absolute immunity that allows it to build as much as it likes in the assets of the State of Israel and in violation of the building laws is unacceptable. Its immunity is only for the fulfillment of his diplomatic duties, not for offenses and the theft of land from the country that hosts him free of charge in its land and properties.”