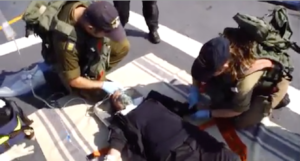 In this 2nd joint naval exercise between NATO maritime forces and the IDF, Romanian and Greek military vessels act out emergency scenarios that require the Israeli Navy to facilitate immediate medical evacuations to Rambam Hospital in Haifa.

Israel became the first NATO partner to participate in an exercise with Operation Sea Guardian, which NATO launched in November 2016.

The exercise, called “Crystal Sea,” was meant “to develop regional medical support to ensure that any health issue among the crew on board military ships participating in Operation Sea Guardian can be addressed quickly, wherever the ships are sailing at the time,” according to NATO.

As part of the exercise, crews on Greek and Romanian ships simulated emergencies that required the Israeli Navy to facilitate medical evacuations to Rambam Hospital in Haifa.

#NATO Allies 🇬🇧🇬🇷🇷🇴🇧🇬 worked with the 🇮🇱 Navy on medical training in the #Mediterranean. The exercise improved #interoperability at sea, especially communications and helicopter manoeuvre and landing procedures, decreasing response time which will help save lives. #WeAreNATO https://t.co/y2sZlZojRx

“It was an example of partnership between the Israeli Navy and NATO. This is the second joint exercise of its kind between NATO maritime forces and the IDF,” Head of the Israeli Navy Planning and Organization Department, Cpt. Yuval Ayalon, told Jewish News Syndicate (JNS). “I am really happy to say that NATO sees the Israeli Navy as a partner in the eastern Mediterranean, in this case, for medical aid.”

The North Atlantic Council can request that the Operation Sea Guardian preform certain maritime security operations including, “uphold freedom of navigation, conduct maritime interdiction, fight the proliferation of weapons of mass destruction, and protect critical infrastructure,” according to NATO.

In August, 10 foreign fleets off the coast of Haifa participated in the five-day, large-scale “Mighty Waves,” exercise. Six ships and five helicopters participated in the exercise in which the after-effects of a significant 7.5 earthquake were simulated.