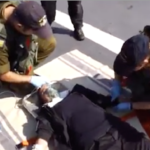 In this 2nd joint naval exercise between NATO maritime forces and the IDF, Romanian and Greek military vessels act out emergency scenarios that require the Israeli Navy to facilitate immediate medical evacuations to Rambam Hospital in Haifa.

Israel became the first NATO partner to participate in an exercise with Operation Sea Guardian, which NATO launched in November 2016.

The exercise, called “Crystal Sea,” was meant “to develop regional medical support to ensure that any health issue among the crew on board military ships participating in Operation Sea Guardian can be addressed quickly, wherever the ships are sailing at the time,” according to NATO. Continue Reading »