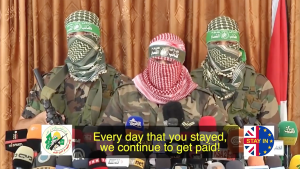 Regavim is  an NGO focused on “ensuring responsible, legal, accountable and environmentally friendly use of Israel’s national lands and the return of the rule of law to all areas and aspects of the land and its preservation.” It has strongly criticized the EU for funding illegal Palestinian construction.

An official statement reads: “Regavim would like to thank all of our supporters who took a stand for the independence of Britain and Israel. Our “Support Israel-Leave Europe” campaign generated a tremendous response and undoubtedly contributed to the Brexit result. Now that Britain has voted to leave the EU, we pray the EU will leave Israel.

“The European Union should immediately stop its illegal building  on Israeli land, stop funding anti-Israel NGOs and allowing European taxpayers’ money to bankroll Palestinian terrorists. Above all, it is time that the EU focus on its own problems and cease its unhealthy anti-Semitic obsession with Israel.

“Regavim is a legal advocacy organization, dedicated to ensuring responsible, legal and accountable use of Israel’s national land. By investigating claims on the ground level, Regavim protects national land interests, presenting its findings in the form of white papers and legal action, in addition to briefing the press and diplomatic corps. Regavim has launched the “Support Israel-Leave Europe” campaign following years of legal battles against the European Union and their well-funded NGO proxies to encourage Israel supporters to take a stand against the EU.”