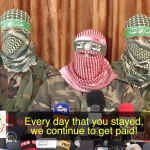 Regavim advocacy group’s campaign includes a mock Hamas video of Palestinian militants urging the UK to stay in the EU to keep the billions of aid money flowing.

An Israeli pro-settlement group is campaigning for Britain to leave the EU in response for what it says is its pro-Palestinian stance, one of its officials said on Sunday.

Regavim is a right-wing NGO that supports Jewish settlements in the West Bank.

Its campaign includes a mock video of a masked Palestinian militant purportedly from the Hamas-ruled Gaza Strip urging UK citizens to remain in the European Union because it supports the Palestinians. Continue Reading »