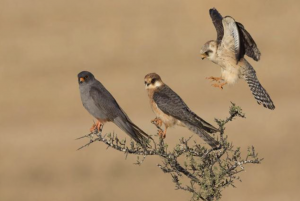 The competition, which is sponsored by the Natural History Museum (NHM) in London and the BBC Wildlife Magazine, concluded Tuesday night with a ceremony in London.

Over 42,000 photographers from 96 countries competed this year and it was the first time an Israeli photographer has won the top prize in one of the WPY’s 20 categories.

Ben-Dov is an ornithologist and businessman from Petah Tikva and beat 7,000 others in the bird category. His winning photo was of three red-footed falcons standing on a tree branch in the Shfela area. The photo also contended for the WPY Grand Title.

Ben-Dov’s photo won the first prize in the Society for the Protection of Nature in Israel’s bird photography contest, held in memory of ornithologist Amit Gefen last year.

Ben-Dov is one of Israel’s foremost ornithologists, and has been in the field for about 36 years. He says he’s “liked birds since childhood.”

He was exposed to the photography world seven years ago, and winning the competition feels to him like coming full circle. “The first photo of my life was of red-footed falcons in the Carmia, where I went with photographer Roni Livne, who taught me.

Ben-Dov’s road to snapping the winning photo was long and winding. “The story started with a silly feeling for photographing red-footed falcons. It’s a species that travels from eastern Europe to southeastern Africa, and Israel is a fairly comfortable way station compared to Syria and Lebanon, where they get killed by the hundreds, sometimes thousands, for sport. The timing is perfect – it’s during Sukkot, I have time off work – an ideal time to properly invest in photographing this noble species,” he told Ynet.

Ben-Dov began his journey toward the winning photo in October 2014, in a plowed cornfield in the Shfela. He says the field had “Many pigeons, hunters who come every morning to hunt the pigeons, large predators, among them young dragonhawks, steppe eagles, lesser spotted eagles, a small number of greater spotted eagles who come to hunt flying pigeons or collect pigeons that were shot and haven’t been taken yet, common lesser kestrels, and of course – red-footed falcons, the stars of the photo, which come to hunt the field’s plentiful bugs.”

Ben-Dov started taking pictures of a number of falcons resting on the hay bales and the uncut corn branches. Ben-Dov noticed a red-footed falcon at the field’s southeastern edge – a friendly adult male – and decided to focus. “There were more than a few falcons in the field, but during the photographing days I noticed a number of extra details, two young females were always near the photographed male. Beyond that, there was a feeling that a certain interaction between the three was going on. As time went on, it feelings were replaced with conclusions that that was indeed the case.”

Three falcons on the same branch

Ben-Dov says the trio showed a different hunting strategy from the rest of the falcons in the area. “All three liked standing at high points and locating the bugs while standing, as opposed to the others, who fluttered around looking. At this stage I decided to try and get the ultimate photo: A male, female, and youngling standing on the same branch. 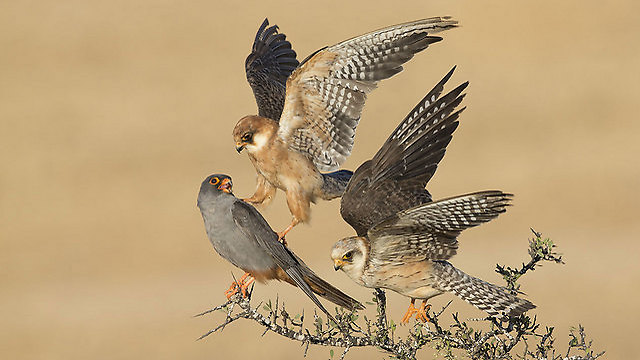 “I called Ezra Haddad, an amazing photographer who has spent many days photographing the falcons, and through whom I got to know the field, I told him about the friendly falcon and the dream of my strange photo. The friendly falcon gave him an urge and he decided to come anyway.”

The photographer duo managed to capture a picture of the male falcon on a branch, and after a short while the two females arrived, and they managed to photograph two of the three on the same branch. The cameramen came to the field every day, spending 10 hours there.

Five days after they started, the big moment came. It was the eve of Sukkot, 3:30pm. “It was very cloudy, with the sub coming out only from time to time, the friendly make stood on the regular branch, a long time passed and one of the females stood on the branch too, but the other didn’t come any closer. At the same time, cloud cover increased and photography conditions worsened. I promised my wife I’d leave the field at 4pm, so I could get to the holiday dinner, which was to start at 6pm, and Ezra’s wife was urging him on the phone to come home,” Ben-Dov recalled.

“All the while, we managed to photograph a male and female together, a male apart, a female apart, two females together. But we couldn’t make the dream come true. At 4:30pm I had no choice, started the car and backed up, in order to leave the area with Ezra still taking photos. The moment I started moving away, the hesitant female came flying in and stood on the regular branch. After begging my wife on the phone, I got a half hour’s extention. It was as if someone in the sky saw it and felt sorry for us, deciding to get the sky out of the clouds for about 20 of the most perfect minutes you could imagine.”

According to Ben-Dov, it’s a once in a century catch. “20 minutes that captured five days of photography, 46 hours of clean field photography and 9,870 photos taken,” he explains. “Sadly, this story doesn’t have a happy ending. When checked the next day, the adult female and youngling female were there, the male was gone and apparently was killed by quail hunters who happened to be there.”

Ben-Dov, who received the prize in the London ceremony says that winning it is “a moment of sanity in an age of insanity,” and asks to sent a message to all nature lovers, “love thy neighbor as thyself starts with your treatment of the environment, and preserving it for future generations.”

The competition’s photo exhibit opened to the public on October 16 at the London Natural History Museum, and will later move to different countries around the world. It’s expected to arrive in Israel in April 2016, and will be displayed at the Eretz Israel Museum in Tel Aviv.