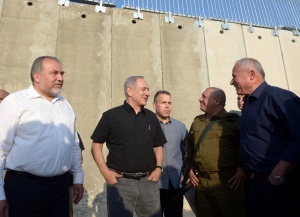 Bar Lev explained that over the past few years, and especially during the current wave of terrorism, Palestinian terrorists have been able to infiltrate Israel through the incomplete sections in the security fence.

There are currently four incomplete sections in the fence: one near the Jerusalem suburb of Maaleh Adumim, one in the Gush Etzion area, and two in the Mount Hebron sector

While the government has several plans in progress to complete the security fence, the new bill seeks to designate its construction a “high-priority national project” that must be completed within 18 months.

Being a security-oriented project, the designation will give the Defense Ministry jurisdiction over the bill’s implementation, including the authority to enact auxiliary bylaws and regulations with aim of completing the fence.

The bill’s abstract explains the construction deadline included in the legislation proposal seeks to facilitate creating a “consecutive line separating Jewish and Arab communities in Judea and Samaria” to bolster security.