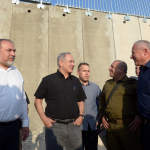 MK Meir Porush (United Torah Judaism) chained himself to the podium before the bill was brought to a vote. – Screenshot Knesset channel

The bill, which passed a 66-21 vote, will now be turned over to a special committee presided by MK Ayelet Shaked (Habayit Hayehudi) that will prepare the bill for second and third readings. Continue Reading »

Many Arab MKs rush out before Hatikva, Israel’s national anthem is played. One MK: As an Arab, the anthem oppresses & humiliates me.

Hatikva expresses the Jewish longing to return & be a free people in the Jewish homeland & in Jerusalem.

The 19th Knesset began work Tuesday with much fanfare. Media coverage of the emotional scenes from the end of the day, as the national anthem Hatikva played, missed one important detail: that many Arab MKs were no longer present.

A Knesset Channel camera caught one MK, the controversial Hanin Zoabi, rushing to grab her bag and leave immediately after taking her oath as an MK. Continue Reading »

Being a Member of Knesset Isn’t so Bad a Job

The MKs’ monthly salary is 38,250 shekels ($10,391) & each is given a car of his/her choosing from any of 6 models. MKs are covered in their travels abroad, either by the Knesset or, in the case of a diplomatic mission, by the Foreign Ministry…and that’s just the beginning.

The 48 new members of the 19th Knesset will soon enjoy the generous salary and benefits that come with the job.

Moreover, MKs are entitled to up to a NIS 4,250 ($1,155) reimbursement per year in clothing expenses, and a similar amount for foreign language studies.

In addition, each Knesset member is granted an annual budget of NIS 27,500 ($7,470) from which one may be reimbursed for a cellphone, two newspaper subscriptions, two home phone lines (one of which is a fax machine), NIS 103 ($28) per diem for food and lodging on days when Knesset sessions run long, and mailing expenses for up to 15,000 items.