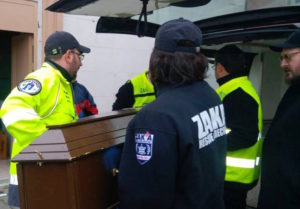 ZAKA chairman, “With so many incidents around the world, our goal is to overcome the dozens of obstacles & bureaucratic hurdles that make life so difficult for people in their hour of need.”

Forty ZAKA rescue and recovery organization volunteers assisted thousands of Johannesburg residents after severe storms ripped through homes in different parts of the city between December 31 and January 2.

The team took part in relief and clean-up efforts together with city officials and several other NGOs.

The organization said that its headquarters in Jerusalem received another request for help on the evening of December 31 from South Africa, where heavy rains and stormy weather had left thousands homeless in the southern and western parts of the metropolis.

“The local emergency services, who were familiar with ZAKA from joint exercises and other natural disasters in the region, knew that there are dozens of trained local ZAKA volunteers to call upon in times of emergency,” the organization said. “ZAKA volunteers under the command of ZAKA South Africa commander Daniel Foreman, working together with the local Home Front Command, erected tents and other facilities for the homeless.”

The severe weather left at least two people dead and 50 others injured.

Johannesburg Mayor Herman Mashaba, speaking to South African press, encouraged the public to donate to ZAKA, among other relief NGOs and civil organizations that helped with the relief efforts.

DURING THE festive season, ZAKA also assisted in four other operations across the world, in France, Costa Rica, Ukraine and Russia.

An Israeli who had been living in France for many years contacted ZAKA with an urgent request for help. “He needed to travel back to Israel for cancer treatment and had booked tickets for his wife and children to accompany him, only to realize that three of his children had no passports,” the NGO said.

“The ZAKA International Rescue Unit entered the frame and, using their contacts in the Israeli Ministry of Interior, managed to secure one-time entry permits for the children,” it continued. “This allowed the family to fly to Israel, despite the lack of passports for their children. Once in Israel, the children were issued with passports and the father received the required medical treatment.”

In Costa Rica, ZAKA assisted with collecting the remains of the two Jewish families who were killed in a plane crash shortly after take-off from Punta Islet to the capital city of San Jose.

10 killed, including 5 Jews in a plane crash in Costa Rica. Zaka volunteers were on the stage to help. – Photo: Zaka/Facebook page

“The plane crashed in a wooded area, making the task of collecting the remains complex and prolonged,” it said.

Meanwhile in Uman, Ukraine, ZAKA helped a Jerusalem family that were in the country to pay its respects at the grave of Rabbi Nachman of Breslov. The family “called the emergency services when they realized that their two-month-old daughter was not responding.”

The child was pronounced dead. Local police demanded an autopsy, to rule out criminal action, despite signs suggested it was a crib death.

After negotiating with police, ZAKA Uman volunteers together with the assistance of locals from the Breslov community, Ambassador to the Ukraine Eli Belotserkovsky and the local governor, an autopsy was avoided. “The body was flown home two days later, together with her grieving family, and transferred from Ben-Gurion Airport in the ZAKA ambulance for burial in Jerusalem,” the NGO said.

Finally, in Sochi, ZAKA commander in Russia Rabbi Yehoshua Deitsch, together with Rabbi Chaim Dantzinger of Rostov, working with the local authorities, assisted with avoiding an autopsy for a Chabad yeshiva student who was killed in a road accident on December 30.

The young man was buried on Sunday.

ZAKA chairman Yehuda Meshi Zahav said that “on days such as these, with so many incidents around the world, our goal is to overcome the dozens of obstacles and bureaucratic hurdles that make life so difficult for people in their hour of need.

“In this way, we can fulfill our mission of assisting any Jew who needs help, wherever he is in the world, and to honor the deceased and ensure that they receive a full Jewish burial in keeping with the Halacha,” he said.