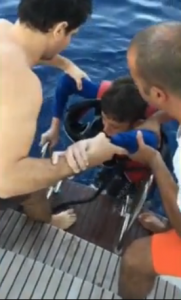 A group of Israelis sailing the Mediterranean saved 12 drowning Syrian & Iraqi refugees providing life-saving assistance before taking them to a nearby Greek island where they were processed & provided asylum.

Israelis on a yachting trip around the eastern Mediterranean on Sunday came across a group of drowning Syrian and Iraqi refugees and saved their lives.

The refugees, like so many others, had been set adrift by a Turkish government that doesn’t want them. They were put in a rubber life raft and pointed in the direction of the nearby Greek island of Kastellorizo.

The Israelis, who are part of the Poseidon Yacht Club in the southern coastal city of Ashdod, told the Ynet news portal that they were surprised to suddenly hear a faint call for help coming from the sea.

“We stopped the boat and found a young refugee wearing a life vest,” said the yacht’s captain, Shlomo Asban. “We lifted him from the water and he told us his brother was lost, and was likely dead.”

At first, the Israelis believed the young man was alone.

“We asked the first young man if there were more people out there, but he started to weep,” said Gal Baruch, another of the Israeli yachters. “We scanned the area with binoculars and discovered a large group of people, including a man going into diabetic shock. We gave him sweet food and were able to save his life.”

In all, there were 11 more refugees clinging to the side of a sinking rubber raft. One, a baby held tightly by his mother, had tragically already died. All were brought safely aboard the Israeli vessel.

“We gave them water and let them use our cellphones. Then we told them we are Jews from Israel, and they kissed us,” recalled Asban.

The Israelis brought the refugees to the nearby Greek island where they were processed and provided asylum.