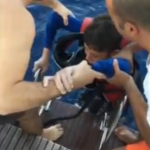 A group of Israelis sailing the Mediterranean saved 12 drowning Syrian & Iraqi refugees providing life-saving assistance before taking them to a nearby Greek island where they were processed & provided asylum.

Israelis on a yachting trip around the eastern Mediterranean on Sunday came across a group of drowning Syrian and Iraqi refugees and saved their lives.

The refugees, like so many others, had been set adrift by a Turkish government that doesn’t want them. They were put in a rubber life raft and pointed in the direction of the nearby Greek island of Kastellorizo. Continue Reading »

President Vladimir Putin sent 16 warships, three ship-based helicopters to the region, saying, “This is a strategically important region and we have tasks to carry out there to provide for the national security of the Russian Federation”.

Russia has deployed a naval unit in the Mediterranean Sea for the first time since the Soviet era, a move Russian President Vladimir Putin says is aimed at defending Russian security, but which comes as Moscow faces off with the West over Syria.

Russian President Vladimir Putin: Deployment is not “saber-rattling” and not meant as a threat to any nation – Photo: AP

Russia’s military chief of staff said on Thursday that Russia had stationed 16 warships and three ship-based helicopters in the region.