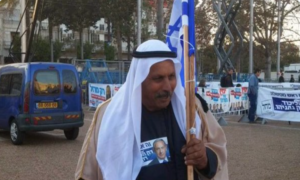 In order to woo votes from Israel’s right-leaning Jewish public, most of the mainstream parties tout their Jewish bonafides. Meanwhile, the handful of Arab parties seem more interested in representing a hostile “Palestinian cause” than working for the benefit of the local Arab population.

Abdul al-Rahman, a resident of the Jerusalem-area Arab town of Abu Ghosh, told Israel Hayomthat following the last election, the United Arab List (the merger of all four Arab parties) “didn’t represent us and it did great damage to the average Arab citizen who wants to integrate.” Al-Rahman was echoing a growing sentiment among average Israeli Arabs who just want to integrate with the Jewish state and live peaceful, prosperous lives. To that end, more and more Arabs are volunteering for military service to join their Jewish countrymen in safeguarding the nation.

Al-Rahman further explained that the Arab parties in Knesset “wants to see an inferior, humiliated Arab, like a cat that needs to be petted. Why? Because as long as the Arabs in Israel are in a state like that, it does the work for them. They want the Arabs to beg them and be weak compared to them. They abandoned the citizens who voted for them and instead focused on the interests of Palestinian Authority President Mahmoud Abbas and Syria.”

In a rare video, Sara Zoabi, a Muslim Israeli woman, talks to her ‘brothers’ in Arabic, praising and glorifying the state of Israel.

Dr. Suhaila Ahmad Halil, a female Muslim doctor from the northern coastal town of Acre, told the newspaper that the Arab Knesset parties should be ashamed of themselves for doing nothing but “honoring and glorifying murderous terrorists: They take the stage, talk about Palestine and don’t notice what’s happening here.”

Those remarks were very similar to those provided to Israel Today by Arab voters we interviewed ahead of the last national election in 2015.

Samer Anzawi, a resident of Nazareth, told us that he and his family had voted for a Jewish party, Kulanu, because “the Arab parties have never represented me. They might talk a lot when it comes to equal opportunities, demands of the Arab sector and lowering costs of living, but at the end of the day they do nothing. They’ve been in politics for ages but nothing has changed.”

Anzawi likewise criticized the Arab politicians in Knesset for focusing the bulk of their attention on the Palestinian cause, rather than acting like representatives of a sector of the Israeli population.

“All they care about is people in the West Bank, not people like me, living in Nazareth and elsewhere, who earn six thousand shekels a month but have a large family to feed and multiple bills to pay,” he argued. “I want the government to represent everyone – whether Jewish or Arab – not a party that would stress its ethnicity and play on people’s feelings when it comes to social injustice and inequality.”

These and other critics of the Arab parties have noted that recent polls suggest some might not pass the electoral threshold when the nation votes on April 9.

Arabs make up about 20 percent of Israel’s population, meaning that their handful of political parties, like those of the ultra-Orthodox Jews (who make up about 15 percent of the population), shouldn’t have much trouble winning enough seats to enter the Knesset. That they are struggling to do so indicates that a great many Israeli Arabs are not voting for the Arab parties.