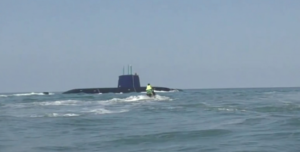 The drills are designed to prepare the navy for the most extreme scenarios in any future opening of a military campaign launched by Hezbollah’s Secretary-General Hassan Nasrallah.

Soldiers from the regular security units of the navy in the north simulated facing Hezbollah commandos to bolster their preparedness for surprise attacks using small vessels, jet skis and speedboats heading for the Israeli coast or attacking Israeli vessels.

Another scenario being considered is the use of jet skies traversing the waters within a matter of minutes without any prior intelligence warning as a diversion from a major assault on Israel’s shores in other areas.

Israel’s sailors and commandos are also preparing for the event that such an attack may be accompanied by a heavy salvo of mortar shells fired by Hezbollah towards the Israeli coast, with each warhead containing between 100-200 kilograms of explosives.

The training exercises also included the use of an armada to stave off assaults from the sea along with the employment of unique recently-upgraded combat techniques to thwart the threat.

The navy and the IDF’s ground forces also trained to face Hezbollah’s special unit cells—many of which are currently fighting in Syria and gaining experience—infiltrating Israeli communities near the Lebanese border with the sole aim of kidnapping Israeli civilians.

“This is absolutely a scenario that could open the next war in the north,” a naval officer who participated in the drills told Ynet.

“We want this kind of scenario to end at sea, even though we may have to take the fight against the threat to the shores,” he added, before explaining why the IDF’s familiarity with the area gave it the strategic edge.

“The soldiers who acted as the enemy in the exercise also serve in the area, they know our weak spots so this was an advantage for the training forces.”

In the Northern Corps exercise, the largest in the IDF since 1998, tens of thousands of people participated from the army, including reservists.