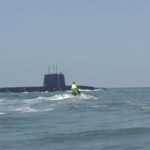 Germany has approved the delivery of the fifth of six promised submarines to Israel – amid claims that the sub will be outfitted with nuclear weapons. Is this part of Israel’s answer to the US nuclear agreement with Iran?

The German Federal Security Council, which monitors Germany’s export of military goods, has given the green light for the delivery of another submarine to Israel. The news has renewed claims that Israel will fit the sub with one or more nuclear-tipped cruise missiles. Continue Reading »