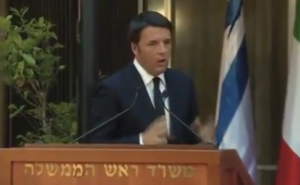 Netanyahu over the weekend spoke by telephone with his Italian counterpart after having sent him a letter following Italy’s UNESCO vote and thanked him for his remarks to the effect that Italy’s vote on the Jewish People’s link to Jerusalem was a mistake that would not recur.

Netanyahu said that even the theater of the absurd has limits and noted that it was important that countries which respected both themselves and the truth not participate in it, the Prime Minister’s Office said in a statement.

Renzi on Friday described a UNESCO resolution condemning Israel’s actions in east Jerusalem as “incomprehensible and unacceptable” and said his officials should have voted against it.

Renzi noted during his conversation with Netanyahu that in the future he would work to influence the positions of other European countries in similar votes and said that he would discuss the issue with Italian Foreign Minister Paolo Gentiloni.

Italy joined most of its European partners in abstaining on a vote which criticizes the Jewish state for restricting access to the Al-Aqsa mosque compound in a way that Israel says denies Judaism’s connection to the city.

“It is incomprehensible and unacceptable, it was a mistake,” Renzi told Italian radio.

The premier said he had issued instructions to Italian diplomats to take a different stance if the same issue arises again in international bodies.

“Suggesting that Jerusalem and Judaism have no connection is like suggesting the sun causes darkness,” he said. “If we have to break with European unity on the subject, so be it.”

The executive board of UNESCO, the UN’s cultural, scientific and educational arm, backed the controversial resolution on “occupied Palestine” on Tuesday.

Referring throughout to “the occupying power,” it condemns Israel for restricting Muslims’ access to the Al-Aqsa mosque compound — Islam’s third holiest site — and criticizes damage by security forces to the site and nearby excavations.

Israel is furious that the resolution refers to the Jerusalem Old City site only by its Muslim name, Al-Aqsa or Al-Haram al-Sharif.