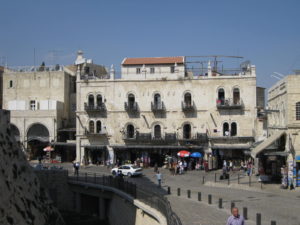 Speaking at a news conference in Amman, Jordan, on Saturday, Patriarch Theophilos III said that the court’s ruling was “politically motivated,” and emphasized that the church will do “everything within its power so that this unjust ruling will be overturned.”

“We cannot stress too highly the extreme seriousness of the situation,” he said, calling on world leaders to intervene.

The statements come as The Jerusalem District Court ruled two weeks ago that there was nothing improper in a real estate deal transferring ownership of two Old City hotels from the Greek Orthodox Church to Ateret Cohanim, an organization which works to strengthen the Jewish presence in Jerusalem’s Old City and in other historically Jewish neighborhoods in eastern Jerusalem.

In the decision, Judge Gila Kanfi-Steinitz ruled that there was no proof that the deals between the church and subsidiaries of Ateret Cohanim were a result of bribery or fraud. She also ordered the church to pay Ateret Cohanim’s legal fees, totaling NIS 30,000 ($8,420).

The hotels are prominently located next to the Jaffa Gate in the Old City, and the decision to sell them to Ateret Cohanim caused a firestorm among the city’s Arab residents. The Greek Orthodox Church sued, claiming that the deals were illegally signed by an employee without authorization, setting off years of litigation.

The Greek Orthodox Church owns large amounts of property in Jerusalem, and has often caught flak from both Jews and Arabs due to their involvement in real estate deals. Currently, a major controversy is raging, as it was recently revealed that the church sold land in the Rehaviah and Talbiyeh neighborhoods to a mystery buyer.

Over 1,000 apartments sit on the land, causing confusion among residents whose home security is suddenly in doubt, and MKs Rachel Azariah (Kulanu) and Yossi Yonah (Zionist Union) have been working in the Knesset to guard the residents’ property rights.