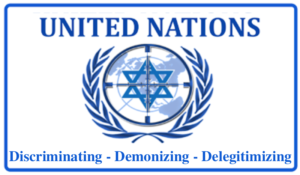 The Jerusalem District Court accepted Regavim’s contention of illegal land appropriation and unlicensed construction projects by the United Nations, halting all work at the UN compound until approved by the State.
– Petitioner’s attorney: “The diplomatic immunity of the UN does not allow it to violate the laws of the host country.”

The Jerusalem District Court ruled this week that until a coordination mechanism is established between the state and the UN, the UN will not begin any work at a compound in the neighborhood of Armon Hanatziv.

A petition submitted by the Regavim organization in March 2017 revealed that the UN had committed a large number of building offenses in the Armon Hanatziv compound and that it had invaded acres of state land beyond the area allocated to it by the State of Israel.

After the submission of the petition, the state admitted that extensive building offenses had indeed been committed and that it would conduct diplomatic negotiations to formulate a coordination mechanism regarding the UN building plans in the area.

The state’s updated announcement said this week that “the diplomatic contacts are taking a long time, so that the coordination mechanism that the parties are working on has not yet been formulated,” but the talks are held “to the satisfaction of the state.”

The Regavim movement noted that the diplomatic contacts began more than a year ago, and the end is nowhere in sight, indicating that the parties are not close to agreements.

Judge Oded Shaham accepted the state’s update and ordered that another update regarding the contacts be given in November. Until then, the UN will not begin any new work on the site.

Regavim welcomed the decision. “The diplomatic immunity of the UN does not allow it to violate the laws of the host country,” says Attorney Avi Segal of the Regavim organization. “Until the petition was filed, the UN did what it pleased with blatant disrespect for the State of Israel and its law. The court established this week in its decision that there will be no construction in the compound without the consent of the State of Israel. The issue of the invasion by the UN of an additional 30 dunam [7.4 acres] of land in the compound, beyond what the State of Israel allocated, will also be discussed separately. ”