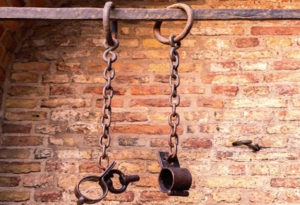 Attorneys Barak Kedem, Arye Arbus, and Nati Rom, who represented the plaintiffs, demanded that an indictment be filed against the PA for the human rights violations.

The Jerusalem District Court allowed publication of the precedent-setting decision which found that the Palestinian Authority was responsible for the arrest, torture, and even murder of suspected collaborators in a series of incidents dating back to the 1990s. The thousand-plus page ruling by Judge Moshe Drori details the legal reasoning of the decision, and also describes the torture that the plaintiffs were subjected to for years in PA prisons.

In one case, the PA was found to be responsible for the murder of one of the plaintiffs who was Jewish on his mother’s side. The victim was murdered in a PA prison in Shechem [Nabulus] in 2002. His half-brother, also born to a Jewish mother, was also held by the PA and tortured during his incarceration.

In other cases, it was established that the PA had attempted to kidnap suspected collaborators who were relocated to other parts of Israel in an effort to return them to PA prisons after they had managed to escape. The imprisonment and torture of suspected collaborators was only stopped after IDF forces released the prisoners during Operation Defensive Shield.

The ruling by Judge Drori stated that, “When the PA arrests a suspect who they suspect collaborated with Israel, the reason given for the arrest is ‘defense security’, however that is not under the jurisdiction of the PA. Arrests for security reasons are carried out under Israeli law according to a temporary agreement. In practice, this means that arrests by the PA of an individual for collaborating with Israel are illegal.”

“Arrests by the PA for reasons that are not under its jurisdiction, particularly in the case of security reasons, has many implications. Here the PA is attempting to direct its citizens to act against Israel and in support of terror. Given that, even a civil suit brought by PA residents arrested for such a reason like the case before us now, has security ramifications,” the decision reads.

“I cannot help but say the following: a careful reading of all the evidence including the many detailed affidavits from the plaintiffs and the descriptions of the torture during their testimony where they showed injured limbs cannot be taken lightly. Indeed, the court is often witness to many difficult situations. However, this case involves dozens of plaintiffs and witnesses, each distinct, and describing multiple events such that the picture is made clear from the details. After reviewing such details it can be clearly stated that there is a preponderance of evidence from which it is apparent that the PA and its described representatives, acted violently including through the use of torture against the plaintiffs.”

During the hearings before the court, many details of the PA’s torture techniques were revealed.

“Many of the plaintiffs have similar descriptions of the torture methods they were subjected to, including torture by the ‘shabach method’ where the victim is tied in different ways, exposure to freezing cold or extreme heat, withholding of water or the forced drinking of water from an in-use toilet, beatings, forced sitting on a sharp broken bottle, and others. It is difficult not to believe that these similar techniques were the result of a single mode of operation that was accepted at the time in the prisons.

“During the entire time of his incarceration in Hevron, the plaintiff was beaten continuously. This included hits to the groin, slamming of his head into a wall which lead to hearing damage, and harm to his eyes which has also left permanent damage. From the beatings he received, the plaintiff lost two teeth. He was tied up in very painful manners, and was denied sleep, the ability to shower, and access to a bathroom. For months afterward he had blood in his urine and even now his body still has many marks from the torture.

“The attacks and torture carried out against the plaintiff including beatings and strikes from rifles owned by the defendants. The plaintiffs head was covered in blood, his shirt was drenched in blood, and he was left bleeding from all over his body. His groin was also struck, leaving him with a large bump and pain in that region. They would tie him in the shabach method, insult him, and spit in his face.”

Attorneys for the plaintiffs are expected to continue in the next few months with hearings about the level of compensation to be given to each victim. The compensation is expected to be in the millions of shekels for each plaintiff.

Attorney Barak Kedem said in response to the decision that “The State of Israel has a deep moral responsibility to those who were tortured or murdered for collaborating with Israel in the fight against terror. The Court’s ruling is important and represents the first step towards fulfilling a moral debt.”

Attorney Arye Arbus responded to the decision saying, “This is a ruling that represents an indictment of the PA. It was stated clearly that the PA imprisoned and tortured dozens of collaborators with Israel. The Court was just in its decision and it is now expected that the Israeli authorities will work to enforce the ruling of the Court against the PA.”

Attorney Nati Rom added, “I am proud that our firm was able to part of this important case and am pleased with the ruling. I hope that we will be able obtain significant compensation for the victims and that this will send a clear message that torture like this has no place in the 21st century.”