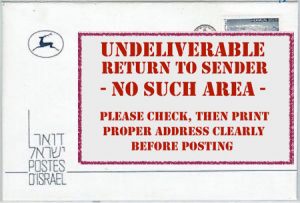 Some French residents living in Jerusalem neighborhoods such as Gilo and Har Homa also received letters addressed to the “Palestinian territories.”

However, they were not instructed to vote where French-Palestinians vote; they were told to go to the French Institute in Jerusalem, which is not over the Green Line.

“They should take this all the way and tell us to vote in Ramallah, but then provide us with security, because the problem isn’t us, it’s the other side,” Cohen said.

Cohen, an aide to French-Israeli parliamentarian Meyer Habib, expressed disappointment and concern that the letter would discourage French citizens in Israel from voting.

“A lot of French citizens are debating whether or not to vote, because they say the country is anti-Israel and they feel alienated from it, and when they see this, they won’t want to vote,” she said. “But I feel a responsibility to vote against [candidate Marine] Le Pen on the far Right, so I’ll still go.”

Habib, who represents expats from Mediterranean countries in the French National Assembly, called the letters a “provocation by the French Foreign Ministry” and said thousands of French-Israelis live over the Green Line.

The parliamentarian wrote a letter to French President Francois Hollande and to center-left presidential candidate Emmanuel Macron, who he supports in the runoff, saying, “Beyond the political and legal dispute, the choice of the French Foreign Ministry to present Israeli towns under the name Palestinian Territories is a provocation that humiliates French people living in Israel.

“To be efficient, our Foreign Ministry has to be connected to reality,” Habib wrote. “I ask to change the name of the country in which thousands of French-Israelis connected to the French Consulate in Jerusalem are registered. Consider the sensitivity of the subject.”