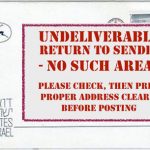 Some French residents living in Jerusalem neighborhoods such as Gilo and Har Homa also received letters addressed to the “Palestinian territories.” Continue Reading »