Jerusalem setting up conditions to draw Hollywood productions to Israel 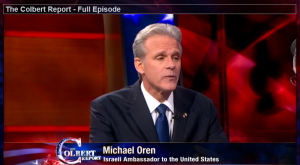 MK Michael Oren moves to realize formation of “Holy-wood” film authority, with special grants of up to 35% of investment value, paving the way for Israel to host big-budget productions for Hollywood.

A new initiative by the Finance Ministry aims to turn Israel into a desirable location for the biggest Hollywood producers, Israel Hayom learned over the weekend.

Formulated by MK Michael Oren, deputy minister for foreign policy in the Prime Minister’s Office, the plan would have Israel establish a new government body to attract big-budget productions by wooing them with sizable grants.

Oren came up with the plan after commissioning a professional survey from international consulting firm KPMG.

The plan, dubbed “Holy-wood” — a play on Israel’s status as the Holy Land and the name of the capital of the American film industry — outlines three steps Israel should pursue if it wants to compete with other Middle Eastern film locations, which gain hundreds of millions of dollars in revenue from hosting big-budget productions.

The first and most challenging step would be to establish a film authority in the Finance Ministry comprising representatives of all the relevant bodies involved in the process of obtaining the necessary permits to film in Israel.

This body would coordinate the production’s needs with police, local authorities, IDF, the Nature and Parks Authority and any other state bodies, in the event that filmmakers need to block roads, access military training areas, or film on nature reserves.

The second step would be to offer producers grants of 25% to 35% of the value of the investment to film in Israel.

The third step involves special insurance provisions in the event that a production has to relocate because of a security problem.

“I have a Hollywood background: I was an assistant to famous director Orson Welles; I worked for some Hollywood productions, and I understand the business,” Oren said.

“I never understood why Israel isn’t an international film center, as we seem to tick all the boxes to be one.

“We have a large range of terrain conditions such as desert, mountains, cities and villages, all within short driving distances. We have teams skilled in photography and editing, and great hotels that are more than suitable for hosting stars. We have television and film studios, and expertise in military issues, such as explosives. Israeli producers believe it’s not cost-effective to film in Israel. You have to remember that it’s all about business, and they want to be profitable.”

Oren said his plan has the full backing of Finance Minister Moshe Kahlon, as “it will create jobs and employment opportunities.”

“As deputy minister of foreign policy, I think there is diplomatic value to this project,” he said. “If Brad Pitt comes here and not Malta [as occurred in the movie ‘World War Z,’ when scenes set in Jerusalem were actually filmed in Malta], it’s a serious blow to the BDS [movement]. If a movie says ‘Made in Israel’ it’s great public diplomacy, an advertisement for Israel.”