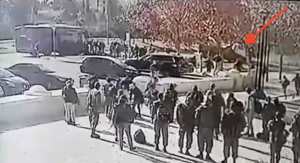 Three days ago, a Palestinian driver plowed a truck into a group of IDF soldiers in Jerusalem, killing four. Throughout last year alone, Israel has suffered dozens of terror attacks carried out by Palestinians, including vehicular ones. Sunday’s attack in Jerusalem was different. Not because of the number of casualties, but thanks to the spotlight it received from international media and the reactions of the international community.

“Nice, Berlin and now Jerusalem” was the opening headline of one of the major American TV news networks, which is often accused of being biased against Israel. The incident itself was defined as a ‘terror attack’ by many non-Israeli channels, although the word ‘terror’ is often used when the victims of such attacks are civilians rather than soldiers. In local media, however, “terror” also refers to attacks targeting soldiers.

Israelis differentiate between Palestinian terror targeting Israeli civilians and Israeli security forces, and terror attacks in Europe targeting local civilians and tourists. Outside Israel, the aftermath of such attacks is viewed in a similar way; however, the motives are viewed differently. In Germany or France there is no so-called “occupation” and no settlements. For the first time this year, it seems as if this argument was overlooked by foreign media and international bodies and individuals.

Unlike during other attacks, this time the foreign media coverage even extended to the funerals of the four slain soldiers. There were a few foreign crews at the funeral of one of them, Shira Hagag. The big local talking point, however, was the absence of Israeli politicians from these funerals. Therefore, Prime Minister Benjamin Netanyahu ordered a procedure requiring government ministers and deputies to participate in such events.

The volume of foreign attention and the terminology used are were exceptional not only with the media. German foreign minister, Frank-Walter Steinmeier, said following the attack, that the images from Jerusalem brought up memories from the attack that took place in Berlin, shortly before Christmas Eve. “I strongly condemn this bloody attack”, he said. “We stand by our Israeli friends during these difficult hours. Terrorism threatens us all together.” The White House issued a similar statement, condemning the “horrific terrorist attack in Jerusalem”.

After the four soldiers were laid to rest, Berlin’s Brandenburg Gate was lit up in solidarity with Israel (illustrated above). This gesture was followed by another one in Paris, where an image of the Israeli flag was projected on the City Hall (illustrated below). In the Netherlands, the city of Rotterdam flew the blue-and-white flag at half mast atop the town hall. According to the Ynet news site, this was an initiative of Rotterdam’s Moroccan-born Muslim mayor, Ahmed Aboutaleb.

In fifteen months of terror, according to the Israeli ministry of foreign affairs, 46 people have been killed in terrorist attacks and 648 people injured. The count on the official website begins at September 2015 and goes up to today. Netanyahu has long been trying to elicit such reactions after terror attacks in his country. Why did it finally happen now? Probably thanks to quick release of video images from the scene, the timing in which it took place and the heightened threat of terrorism in the West.

The Israeli flag flying at half-mast atop City Hall in Rotterdam, the Netherlands, on Jan. 10, 2017. – Photo courtesy of NIW/David de Leeuw

On the day of the truck ramming attack in Jerusalem, Netanyahu arrived at the scene and gave a statement in English, aimed at international ears: “We are fighting this plague, and we will defeat it.” He added that there may be a connection between this attack and similar attacks recently in France and Berlin. He implied that the attacker was a supporter of the Islamic State who was inspired by it.

The alleged IS connection is what caught the attention of the media. Unlike during other attacks, foreign reporters were asked to answer questions about potential Islamic State threats in Israel. The Palestinian motive or the Palestinian cause – were suddenly marginalized in the reporting, though Israeli officials acknowledge there are no active IS cells in the country.

Whether it is accurate to compare the attacks carried out by Muslim extremists in Europe and Jerusalem, the families of the four soldiers who died in their early 20’s must’ve appreciated getting sympathetic spotlight from abroad, as well.

Tal Schneider is an i24news anchor and reporter.

Unlike the tendentious behavior expressed in Paris, Berlin and Rotterdam, the BBC remained stone-cold in their antisemitic attitude regarding Israelis killed:

and as for the ‘Palestinians’…