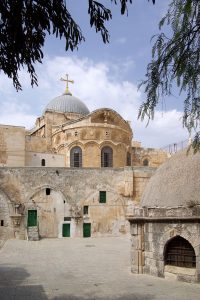 The decision was made in protest against the bill, which is expected to be discussed today by the Ministerial Committee on Legislation, allowing the State to expropriate land that the churches have sold since 2010, as well as to protest the Municipality’s intention to collect municipal property taxes.

“We are following with concern the systematic campaign against the churches and the Christian community in the Holy Land, in flagrant violation of the existing status quo,” the church leaders wrote.

It was not immediately clear how long the closure of the church, announced by Christian officials at a news conference which began around noon, would last.

The bill proposed by Knesset Member Rachel Azaria (Kulanu) and expected to come up today in the Ministerial Committee is supported by the Justice Ministry. The aim of the proposal is to block the trend of extensive land sales in Jerusalem, mainly by the Greek Orthodox Church and the Catholic Church, to private companies.

The other initiative about which church heads are furious is the move by the Jerusalem Municipality to collect municipal property taxes from church assets in the city. So far, church property has been exempted from paying property tax. But last month the Municipality issued a statement in which it said it had begun a major process of collecting municipal taxes from offices, schools, and buildings designated for various purposes owned by the churches.However, Azaria made it clear that municipal taxes would not be collected from prayer houses, which are exempt from taxation.

The churches argue that the municipality’s move is contrary both to international agreements signed by the State and to the historic status quo between the churches and the governments controlling Jerusalem.

“As a measure of protest, we decided to take this unprecedented step of closure of the Church of the Holy Sepulchre,” Greek Orthodox, Armenian Apostolic and Catholic leaders said in a statement. They said recent Israeli measures seemed to be “an attempt to weaken the Christian presence in Jerusalem”.

Christian leaders say legislation being considered by Israel’s government would allow church property to be expropriated. “This abhorrent bill is set to advance today in a meeting of a ministerial committee which if approved would make the expropriation of the lands of churches possible,” the statement said.

“This reminds us all of laws of a similar nature which were enacted against the Jews during a dark period in Europe.”

Jerusalem Mayor Nir Barkat said, “The Church of the Holy Sepulchre and prayer houses of all churches are exempt from municipal taxes; there is no change in this and it will continue. But does it make sense to anyone that commercial areas like hotels, halls, and businesses should be exempt from municipal taxes only because they are owned by churches?

Petra Hotel, inside the Old City of Jerusalem, was sold by the Greek Orthodox Church, then protested sale as fraud because buyers were Jewish. – Photo: DiggerDina:Wikimedia

“Why would the Mamilla Hotel pay municipal taxes and the Notre Dame Hotel be exempt?Unfortunately for too many years, the State has not allowed the Municipality to collect these debts on commercial areas that reached NIS 650 million(!). It is illegal and unreasonable. Either the State should return this money which is intended for city development, or we will continue to collect it from the churches as required by law. I will no longer agree that Jerusalem residents will pay these huge sums.”

The Jerusalem Municipality said, “The Jerusalem Municipality maintains a good and respectful relationship with all the churches in the city, and will continue to care for their needs and preserve their full freedom of worship. However, we can not accept that only in Jerusalem hotels, halls, and commercial businesses will be exempt from municipal taxes only because they are owned by the churches. This is in contrast to Haifa and Tel Aviv, which collect property tax from the business assets of the churches. It should be clarified that the Church of the Holy Sepulchre, like all houses of worship of all faiths, is exempt from municipal taxes and the municipality does not collect property tax from prayer houses.”