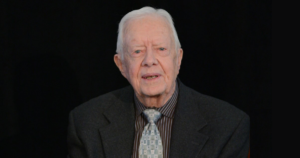 “If implemented, the plan will doom the only viable solution to this long-running conflict, the two-state solution,” said Carter, who brokered the landmark 1978 Camp David Accords that brought peace between Israel and Egypt.

He pressed UN member-states “to adhere to UN Security Council resolutions and to reject any unilateral Israeli implementation of the proposal by grabbing more Palestinian land.”

“By calling Israel ‘the nation-state of the Jewish people,’ the plan also encourages the denial of equal rights to the Palestinian citizens of Israel,” it said.

Trump presented his long-awaited plan Tuesday alongside Israeli Prime Minister Benjamin Netanyahu, his close ally, who shortly afterward signaled he would seek to annex a large part of the West Bank.

Trump’s plan recognizes Israeli sovereignty over most of its West Bank settlements and the Jordan Valley, as well as an undivided Jerusalem.

Even before the plan was released, Palestinian leadership gave their unequivocal ‘No’ to the “Vision for Peace” Conceptual Map, published by the Trump Administration on January 28, 2020

The plan also backs a Palestinian state with a capital on the outskirts of Jerusalem but says the Palestinian leadership must recognize Israel as a Jewish homeland and agree to a demilitarized state.