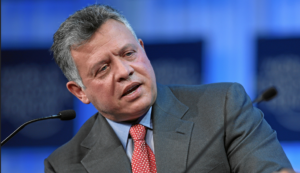 Under Annex I (b) and (c) Jordan leased the Naharayim/Baqura and the Zofar/Al-Ghamr areas, formally under Jordanian sovereignty, to Israel for a period of 25 years which was to be automatically renewed for the same period on an ongoing basis.

According to the terms of the treaty, the lease could only be annulled with one years notice. With the deadline for the lease renewal approaching on Thursday October 25, Abdullah informed Israel of his decision to return the land to full Jordanian sovereignty thus signalling that the agreement has expired.

“Our decision is to terminate the Baquoura and Ghamar annexes from the peace treaty out of our interest to take all decisions that would serve Jordan and Jordanians,” the King wrote in a Tweet. “Baqoura and Ghumar were at the top of our priorities,” he added.

The cabinet is set to convene an emergency session to implement the royal order.

Responding to the announcement, Israel’s Prime Minister Benjamin Netanyahu said he intended to “negotiate with Jordan for its extension” adding that “there is no doubt that the entire agreement is important and dear to both our countries.”

Abdullah’s decision comes amid increasing domestic pressure. Last Friday, demonstrators in Amman took to the streets urging him to exercise Jordanian sovereignty with some even pushing for the Wadi Araba peace treaty to be rescinded altogether. Haaretz reported that eighty-seven Jordanian lawmakers signed a petition on the matter.

The decision relates specifically to Article 2 of the treaty that initially set out the terms of the agreement granting thousands of dunams at the disposal of Israeli farmers.

“Under the peace treaty with Israel, the two parties agreed that the areas will be under Jordanian sovereignty with Israeli private land-use rights,” Jordanian Foreign Minister Ayman Safadi said during a parliamentary session in March cited by the Jordan Times.

“These rights include unimpeded freedom of entry to, exit from and movement within the area, as well as not being subject to customs or immigration legislation,” he said, explaining the terms of the agreement.

An old electricity power plant on land of Jewish ownership in Baqoura, bordering northern Israel. Jordan has decided to cancel the annexes dealing with this land and another in Ghamr [bordering southern Israel], a right outlined in the 1994 peace pact. – Photo: Wikipedia

The case of Baqoura could provide a predicament for Israel and Jordan given a possible dispute over land rights. Israeli citizens have ownership rights dating back to 1926 when Russian Jewish engineer Pinhas Rutenberg obtained a permit from the British Mandatory government to build an electric power plant in the area.Baqura is a border area of six square kilometers (2.4 sq miles) in Jordan’s northern Irbid province, while Ghumar covers four square kilometres in the southern Aqaba province.

When it was signed in 1994, the Wadi Araba treaty made Jordan one of only two Arab countries to have reached a peace agreement with Israel, along with Egypt in 1979.

Under Jordan’s constitutional monarchy, only King Abdullah has the power to eventually rescind the peace deal with Israel.

Jordan controlled the West Bank as well as East Jerusalem and the Old City until the Six Days War in 1967, when Israel took them over alongside the Gaza Strip, the Golan Heights and the Sinai, which was later returned to Egypt.