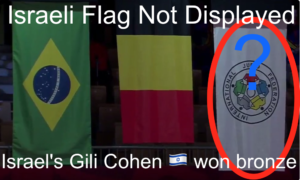 The Abu Dhabi Grand Slam and the Tunis Grand Prix were officially suspended, International Judo Federation president Marius Vizer announced, because the federation “is committed to promoting the moral principles and values of Judo, Olympism and sport in general, thus making an active contribution to the promotion of peace and equality between nations, races and genders.”

The federation decided to take what it called a firm and constructive stance in the fight against discrimination in sport.”

The federation requested the organizers of the two events to provide a letter of guarantee signed by their governments that all federation member nations would have the right to participate in their events in equal conditions.

Wow. Israeli wins gold in Judo in Abu Dhabi, which refuses to show Israeli flag or play its national anthem. So he sings it quietly himself. pic.twitter.com/EuJbcP4wTu

After no positive answer was received to date, the federation’s executive committee decided to suspend both the Abu Dhabi Grand Slam and the Tunis Grand Prix until governmental guarantee is given to ensure free and equal participation of all nations at the events.

“The International Judo Federation is aware that the situation and incidents registered are due to a complex and complicated political and historical context, but we strongly believe that politics should not have any interference in sports and that sports should be a reflection of human respect, understanding and mutual cooperation and that sports, as one of the highest expressions of humanity, should have the power to overcome any other conflict or interest,” the federation said in a statement posted on its website.

The decision came after Regev met with Vizer when he came to Israel when he came for the European Judo championships two and a half months ago. She has lobbied him extensively since then.

Regev accused Tunisia and Abu Dhabi of “playing an ugly game and showing their prejudice.” She said Vizer’s decision was brave and should set an example for all international sports leaders.

Shameful: Israel 🇮🇱’s Gili Cohen won bronze at #JudoAbuDhabi2017, but instead of raising her flag, they’re raising the @IntJudoFed‘s. pic.twitter.com/u4uh4Wsetn

“I welcome Vizer’s justified and corageous decision to cancel the grand slam competitions in both Abu Dhabi and Tunisia due to their outrageous decision to draw a distinction between national teams that would be ‘allowed’ to fly their flags and to sound their national anthems and others that would not,” Regev said. “International competitions  should not ban any state. They should be based upon equality.  Sports should bring different nationalities together. Sports bridges between nations, cultures and people. The underlying principles are equality and the brotherhood of mankind.”

Yael Arad, who won Israel’s first ever Olympic medal in 1992, told The Jerusalem Post she also congratulated Vizer and welcomed the decision, which she said not only does justice for the athletes and promotes equality but also is especially important ahead of the key matches that will decide who competes in the next Summer Olympics, because the decision ensures that the compeitions will be run fairly.