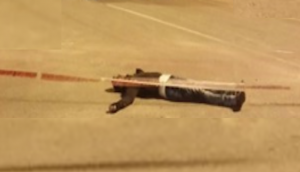 Would-be murderer shot, neutralized at the scene near Huwara by soldier, with no injuries to Israeli side in 2nd such incident in the area in 2 days.

A knife-wielding Palestinian assailant attempted to stab Israeli security forces stationed near Huwara in the West Bank on Wednesday, the IDF said.

The would-be attacker was shot and wounded before being apprehended by Israeli forces. There was no injury to the Israeli side in the second such incident in the area in the past two days.
It was reported that the attackers of both incidents are cousins. A senior IDF official said that refugee camps are more tense for residents and that once an attack occurs, the IDF is aware that the risk of copycat attacks go up dramatically.

The Huwara area, located south of Nablus, has served as a flashpoint site in recent days, with a Palestinian vehicle set on fire in the region overnight between Tuesday and Wednesday.

According to Israel Police, security forces arrived to the scene and identified a vehicle which was apparently set ablaze in a possible arson case. Authorities were investigating the background of the incident.

While further details of the event remained unclear, arson attacks have previously been used in what have been deemed ‘price tag’ attacks by extremist settlers in the West Bank against Palestinians.

Palestinian Arabic language news network al-Quds reported that Israeli “settlers set fire to the vehicle of Mustafa Dhamidi from the town of Huwara.”

Earlier on Tuesday, a separate Palestinian perpetrator attempted to carry out a stabbing attack near Huwara. A soldier from the IDF’s Golani Brigade neutralized the assailant at the scene and thwarted the attack.

The attacker, was shot and according to initial reports was transferred in critical condition to a nearby hospital via an IDF ambulance to receive medical treatment.

Yossi Dagan, head of the Samaria Regional Council where the attempted stabbing occurred, immediately responded by saying that “again we are witnessing attempts to hurt the routine of our daily lives. We thank the soldiers for the alertness they exuded and for their daily activity for the people of Israel. These attempts to damage the routine of our lives will not carry fruit.”