U.S. Sec of St John Kerry’s plan to restart peace talks: Israel will release 103 Palestinian terrorists from prison, freeze home construction outside major towns & a $4B transfer to the Palestinian leaders by the U.S.

The Palestinians are still not satisfied.

US Secretary of State John Kerry‘s plan to restart peace talks between Israel and the Palestinians calls for the release of some 103 Palestinian prisoners serving time in Israeli prisons from a time prior to the signing Oslo accords, London-based Al Hayat reported, citing Western diplomatic sources. 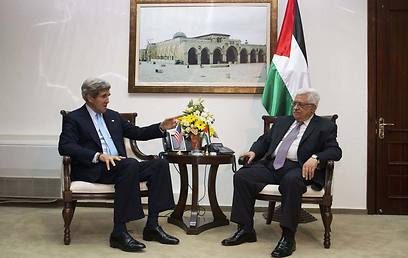 According to a Palestinian source, the difference of opinions between the two sides remain large, as the Palestinians demand the release of all 103 together and a complete halt in settlement constriction.

According to the report, Kerry’s plan for renewed negotiations also includes a freeze in construction in settlements outside the main settlement blocs and a three-pronged economic renewal project for the Palestinian economy.

According to Kerry’s plan, direct negotiations between the two sides will be confined to a six to nine month period; during which Israelis and the Palestinians will be expected to discuss the core issues of the conflict.

“The plan will also include investments in the Palestinian economy, estimated at around $4 billion as well as Israeli authorization of Palestinian projects in Area C,” the paper reported.

Sources close to the issue were quoted as saying the plan also includes a public statement by Prime Minister Benjamin Netanyahu in which he will publicly commit to negotiations, specifically according to the outline presented by US President Barack Obama during his speech in Israel: two-states, living side by side in peace and prosperity on the basis of 1967 borders and land-swaps where such borders are unfeasible, in addition to Palestinian recognition of Israel as a Jewish state.

Palestinian commentators believe that Palestinian President Mahmoud Abbas will sit down and negotiate if Israel releases the 103 prisoners, because their release will be perceived as a massive achievement for Palestinians.

Kerry is expected to return to the area soon for an additional round of shuttle diplomacy between the two sides, but parts of his staff have remained in the area to continue the process.

“We have bad had a experience with Netanyahu. He will release the first group and then drag his feet in negotiations. Hence we want them all released together,” a Palestinian source said.

Regarding the demand for a complete and public freeze in settlement constriction, and not a semi-official halt outside the major settlement blocs the source said: “Israeli considers a large majority of settlements as part of the major blocs. Hence we want a complete freeze, at least during negotiations.”