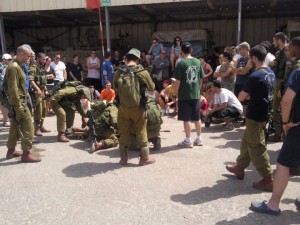 According to the article, the tunnels enable Hezbollah terrorists to attack Israel at a moment’s notice, and include sophisticated ventilation and electricital systems and enough supplies to allow militants to remain in the tunnels for weeks at a time.

That effort includes a great many Arab communities, who after the last Lebanon war realized Hezbollah missiles do not differentiate between Arabs and Jews.

“There is a big change in the Arab population in Israel in that they are much more willing to cooperate with us,” Col. Eren Makov, the Northern Regional Commander of the Homefront Command, said in a recent interview with The Media Line. “We give them training in what to do and they see it as a contribution.”

Israeli officials stress that the next war with Hezbollah isn’t likely to happen anytime soon, given that the Lebanese group is so bogged down in the Syrian civil war, in which it has lost thousands of troops.

On the other hand, Hezbollah operates at the whim of the Iranian regime. Should Tehran or the besieged regime of Syrian dictator Bashar Assad view it as beneficial to draw Israel into the conflict, they could order a Hezbollah assault on the Galilee or Golan Heights.