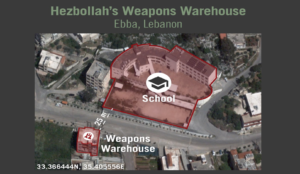 The explosion of the warehouse would be half the size of the Beirut explosion of last year that killed at least 211 people and badly damaged a large part of the city.

An animated video of the suspected Hezbollah weapons site in the heart of a residential area in southern Lebanon. – Video: IDF Spokesperson’s Unit

The IDF hopes that with the disclosure, the group will remove the weapons from the building.

The IDF sent a mysterious tweet on Wednesday, posting a set of coordinates leading to Kfar Ebba.

But, Baram warned, should the group keep the weapons there, “the IDF will not hesitate” to destroy it.

Israel accuses the terrorist group of continuously violating the resolution and storing much of its weaponry in villages along the border.

“Hezbollah consistently uses civilian assets as an operational tactic for military activity,” Baram said, adding that “the IDF and the Northern Command will take all measures to reduce harm to civilians, and yet the IDF will not hesitate to destroy active targets.”

The building is one of the thousands of targets the IDF has gathered over the years, including weapons warehouses and military infrastructure belonging to Hezbollah in the heart of residential and urban areas. 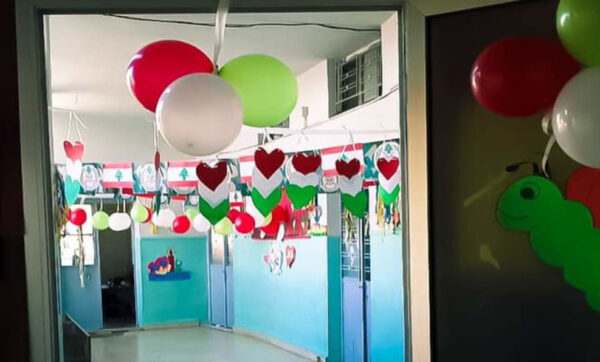 Using innovative intelligence and advanced technology, the IDF’s target bank in the Northern Command is 20x larger than the target bank the military had in 2006, with thousands of targets ready to be attacked including headquarters, strategic assets and weapons storehouses.

A report released last year by the ALMA Research and Education Center found that there are at least 28 missile launching sites belonging to Hezbollah in civilian areas in the Lebanese capital of Beirut.

The report found that the never-before-published sites concentrated mainly in Hezbollah-dominated areas of Beirut are related to the launch, storage, and production of the group’s Fateh 110/M600 are medium-range missiles and are “the same as those subject to the Hezbollah missile precision-guided missile project (PGM’s).”

Our intelligence can reveal that Hezbollah has built a weapons warehouse just 25 meters from a school in the village of Ebba, Lebanon.

This endangers the lives of 300 children who attend the school.

Hezbollah doesn’t want you to RT this,
but these innocent children need you to pic.twitter.com/FJyEyJZrIu

The sites, which also included locations of command and control infrastructure, missile assembly, rocket fuel storage sites, and missile bunkers were found next to high schools, clinics, hospitals, golf clubs, soccer fields as well as the Iranian Embassy and Lebanese Ministry of Defense.

“Almost all of the sites are in southern Beirut, an area controlled by Hezbollah, and are located in civilian neighborhoods, inside private houses, medical centers, churches, industrial sites, public offices, fast food chains, as well as in open spaces nearby, hence activating the “human shield” tactic,” the report read.