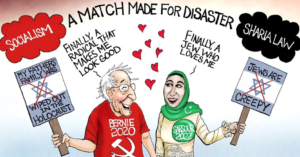 Linda Sarsour spews antisemitic tropes at the American Muslims for Palestine conference falsely claiming #Israel is being “built on the idea that Jews are supreme to everybody else” Footage: https://t.co/xAdoRIFE7L pic.twitter.com/V9fNhvgVy7

“How can you be against white supremacy in the United States of America and the idea of living in a supremacist state based on race and class but then you support a state like Israel that is built on supremacy,” Sarsour said in a speech delivered at the 12th Annual Conference for Palestine in Chicago.

In his speech, Sarsour also questioned how Americans who call themselves progressive Zionists explain “how can they be against the caging of children at the U.S.-Mexican border, but then you support the detainment and the detention of Palestinian children in Palestine. How does that work, sisters and brothers?”

In response to criticism following the speech, Sarsour posted to social a clarification of her statements, apologizing for any “confusion” and that her comments were not aimed at the Jewish community.

“Over the weekend, I made comments about Israel that require context to understand. I was specifically referring to the racist argument at the heart of the nation-state law recently passed by the Israeli government – not the Jewish people. I apologize for the confusion.”

Or:
“Damn. Someone filmed me and put it on the internet.” pic.twitter.com/xJ2ciScFVO

Sarsour, who left the Women’s March in September, has found herself mired in controversy over her vocal support of the BDS (Boycott, Divestment, Sanction) movement, which critics argue is anti-Semitic pointing to the group’s non-committal stance on Israel’s right to exist as a Jewish state.

Born in Brooklyn to Palestinian immigrant parents, Sarsour has endorsed US Senator Bernie Sanders for his 2020 White House run, saying she would be “proud” to help “make history” by electing the first Jewish American president.