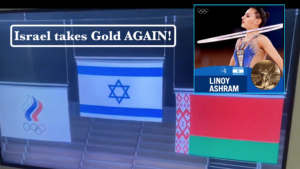 Israeli Nicol Zelikman – who also made the final after both qualified on Friday – came back from behind to finish the competition with an impressive seventh place, with an overall score of 95.600.

Three times world champion, Russian Dina Averina, came in a close second to get the silver medal with a total score of 107.650, while the Belarusian Alina Harnasko got the bronze with a score of 102.700.

After the second exercise, Ashram was in first place with an overall score of 55.850, while Zelikman placed ninth, with a score of 47.850.

Ashram once again had an amazing exercise with the third event, the bars, with another impressive score of 28.650, which again placed her first for the round. Zelikman continued to improve her performances during the clubs exercise, receiving a score of 25.600.

Ashram finished off the final with the ribbon exercise, gaining another astounding score of 23.300, to place first overall with a total score of 107.800 to take home the gold.

Zelikman’s final exercise went fantastically, receiving a score of 22.150, to round out the final with an overall score of 95.600 and a come-from seventh behind place finish.

Ashram was heavily favored to earn Israel its first ever Olympic medal in Rhythmic Gymnastics and its fourth medal in the Tokyo 2020 Games, after racking up a host of medals in world competitions in recent years.

This was Israel’s thirteenth Olympic medal overall, the country’s third ever gold medal, and its second gold medal this week in the Tokyo Games after artistic gymnast Artem Dolgopyat won gold in the men’s floor exercise on Sunday.

After winning the gold, Ashram told reporters that “It was an amazing feeling to stand on the podium in first place, it’s a crazy experience, I’m still the most excited I’ve ever been.”

“I was not alone, there was this huge crowd that came to cheer me on,” Ashram continued, saying “It was a dream. I was waiting to see if the end result would be enough for me, happy to know that the hard work paid off.”

After her seventh place finish, Nicol Zelikman said excitedly that “We are now two in the top eight in the world from Israel.”
“It was a dream come true, Linoy and I proved that we are a gymnastics powerhouse. I want to thank my whole family for all the 17 years they worked to help me reach my achievements, I was privileged to reach this dream.”

Ashram rose from the qualifiers from third place with 103.100 points in the overall score. Zelikman maintained stability throughout the qualifying round and performed well in all exercises. She finished with an overall score of 95.900 which secured her a seventh place finish in the overall standings and the ticket to the final.

Earlier on Saturday, and during her final campaign for Team Israel, coach Ira Vigdorchik helped the national Rhythmic Gymnastics team qualify from fourth place for the finals in the group all-around competition early on Saturday morning, after Gymnasts Yana Kramarenko, Ofir Dayan, Natalie Raits, Yuliana Telegina and Karin Vexman received a total score of 84.650 for their exercises.

Team Israel especially excelled during their second drill, which mixes batons and hoops, receiving a score of 40.650.

This will be Team Israel’s fourth consecutive Olympic final in this event, which is scheduled to take place on Sunday at 5 a.m. Israel Standard Time.

The team has won numerous medals at various competitions worldwide, including the European Championships, and will look to take a place on the podium in Tokyo as well.