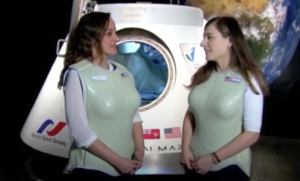 Dubbed AstroRad, the vest-like suit, first adapted for female astronauts, protects vital body organs and tissues which are especially sensitive to radiation damage such as lungs, bone marrow, the large intestine, the chest and the ovaries, the agency said in a statement. According to the statement, the company hopes the results of the experiment will lead NASA to use the suit in future manned missions to space.

Founded in 2011 and headquartered in Tel Aviv with additional offices in Tampa, Florida, StemRad develops and manufactures wearable anti-radiation equipment for military, scientific and medical applications. The company’s flagship product is the 360 Gamma, which protects a user’s pelvic bone marrow. In December, StemRad announced a $6 million investment round.