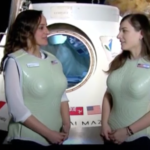 Dubbed AstroRad, the vest-like suit, first adapted for female astronauts, protects vital body organs and tissues which are especially sensitive to radiation damage such as lungs, bone marrow, the large intestine, the chest and the ovaries, the agency said in a statement. Continue Reading »