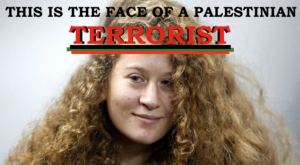 Because the 17 yr-old Ahed Tamimi stands accused of multiple assaults & assorted charges against IDF officer & soldier, and deemed ‘dangerous’, she will be held until trial on January 31.
– Ahed’s father: ‘When both the prosecutor & judge are soldiers, the decision was obvious.’
– WATCH video family posted online of the attack.

A military court on Wednesday ordered Palestinian teen provocateur Ahed Tamimi, 17, and her mother Neriman to be held in custody until trial.The trial of the younger Tamimi, who stands accused of assaulting an IDF officer and soldier, will begin on January 31.

Bassem Tamimi, Ahed’s father and Nariman’s husband, rejected the court’s decision, saying, “When both the prosecutor and the judge are soldiers, and their shared interest is continuing the occupation, the decision was obvious.”In explaining its decision, the court cited “the initiative to carry out the acts, the scope of these acts, the intensity of the violence used and the timing they were carried out in—while security forces were operating against clashes in the village,” noting these “establish clear grounds to claim (Tamimi) is dangerous, and it is doubtful this can be disputed.”

The judges went on to say that “the defendant (Ahed Tamimi) indicated in her behavior and words that her actions stem from the desire to promote an ideological goal, and this makes it very difficult to release her from detainment.”

The court further noted the junior Tamimi’s silence as being to her detriment.

With regards to Tamimi’s age, the court said that “it has been determined more than once in matters concerning minors that the involvement of the parents and their influence over the children is an important consideration when it comes to examining their rehabilitation prospects and the prevention of future offenses.

“The defendant’s age is a significant and important factor in assessing the level of danger she poses and examining whether the purpose of the arrest can be achieved in some other manner that does not hurt her freedom as much. However, despite clear considerations of the minor’s best interest and of her rehabilitation prospects, age is not the most important thing.”

Ahed Tamimi and her cousin Nur, 21, were filmed provoking soldiers stationed in Nabi Salih, pestering them and attempting to kick and punch them, while the soldiers maintained their composure and did not respond.

Ahed was charged with 12 different counts for six different incidents, including aggravated assault, hindering a soldier in the line of duty, incitement, threatening a soldier’s life and stone-throwing.

Nur was charged with aggravated assault of a soldier and obstructing a soldier from carrying out his duty.