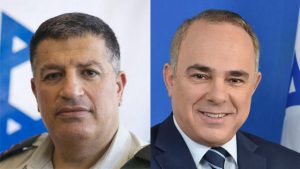 Mordechai recently wrote a letter to the directors-general of the Ministries of National Infrastructures and Finance, the National Security Agency and the Shin Bet, as well as to the military secretaries of the Prime Minister and Minister of Defense, informing them of his decision to reduce the amount of electricity that would be transferred to the Gaza Strip via the electricity lines.

The decision was made in the context of a sharp internal dispute between the Palestinian Authority in Ramallah and the de facto Hamas administration in Gaza. In light of the request of the Authority, Mordechai instructed to limit the electricity load by ten lines of electricity to the Gaza Strip, so that the total electricity consumption will not exceed NIS 25 million a month.

A few days ago, Steinitz sent a harsh letter to Mordecai, in which he wrote: “I received your letter to the director general of my ministry with astonishment and wonder regarding the implementation of the decision of the Palestinian Authority’s head on the issue of electricity in Gaza. I found it necessary to personally respond.

The Palestinian Authority owes hundreds of millions of shekels for the electricity supplied to the PA, so if we are to cut the price, we should be the ones to decide where to cut electricity (perhaps in the Mukataa in Ramallah) and not become a pawn in their hands.”

Steinitz added, “I would like to conduct a professional discussion on the subject prior to any decision making.”

(Translated and edited by N. Elias)