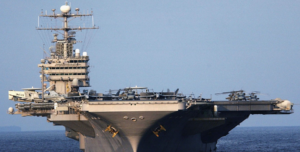 The United States is deploying a carrier strike group and a bomber task force to the Middle East to send a clear message to Iran that any attack on US interests or its allies will be met with “unrelenting force,” US national security adviser John Bolton said on Sunday, according to Reuters.

Amid rising tensions between the United States and Iran, Bolton said the decision was “in response to a number of troubling and escalatory indications and warnings.”

“The United States is not seeking war with the Iranian regime, but we are fully prepared to respond to any attack, whether by proxy, the Islamic Revolutionary Guard Corps or regular Iranian forces,” he added.

Tensions have risen between the US and Iran over the past year, after President Donald Trump withdrew from the 2015 nuclear deal between Iran and world powers.

A significant portion of the information about Iran’s preparations for a terror attack against a US target or its Gulf allies was achieved by Israeli intelligence, especially the Mossad, senior Israeli officials told Israel’s TV News 13.

The senior Israeli officials noted the information obtained by the Mossad and other Israeli intelligence agencies was transferred to the Americans and was part of the basis for the American decision to reinforce their forces, sending another aircraft carrier to the Gulf.

A handout photo made available by the U.S. Navy shows F:A-18F Super Hornets flying in formation above the aircraft carrier USS Abraham Lincoln on Feb. 9, 2012. (EPA-EFE:REX)

The senior officials noted that at this stage it is not a focused warning, but it is clear that the target of the expected Iranian attack is not Israeli, but an American target or one belonging to one of the US’s Gulf allies.

A senior Israeli official further told Israel’s TV News 13, “It’s unclear to us yet what the Iranians will try to do and exactly who will do it, but it is clear to us that the temperature by the Iranians is rising due to the heavy American pressure on them.”

The US has since imposed two rounds of sanctions on Iran, the latest of which went into effect in early November. Those sanctions aim to reduce Iran’s oil exports to zero in a bid to curb the Islamic Republic’s missile program and regional influence.

In response, an angry Iran passed a bill labeling US forces in the Middle East as terrorists.

In the last few years there have been several close encounters between Iranian and American vessels in the Persian Gulf.

Recently, a commander in the Iranian Revolutionary Guards threatened US bases in Afghanistan, the UAE and Qatar, as well as US aircraft carriers in the Gulf. These bases, he said, are within range of Iranian missiles which have a range of 700 km (450 miles).