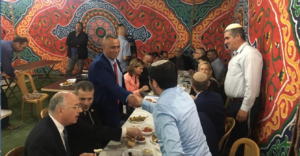 Muslim leaders met yesterday at the Samaria Regional Council to celebrate Iftar and Lag Ba’Omer saying, ‘Many of us pray for Israeli sovereignty and to Stop the Palestinian Authority’s terrorist path.’

Arab and Muslim leaders yesterday arrived at the offices of the Samaria Regional Council to celebrate Iftar and Lag Ba’omer together with Council head Yossi Dagan.

Among those in attendance were Sheikh Abu Khalil Tamimi of Ramallah, Mohammed Massad of Jenin, Sara Zoabi as well as other leaders who preferred to hide their identities for fear of their lives.

Dagan and the Muslims discussed the Deal of the Century’s impact on the region, eradicating terror and incitement to violence, and discussed with them ways to maintain peace and economic and social cooperation.

“Terror is the result of Palestinian Authority incitement,” Dagan said. “We work with local leaders and Sheikhs who oppose the PA and oppose the path of terror. We have disagreements and there are many things where we see eye to eye. First and foremost, it’s important to have shared dialogue with those who are ready and willing to consider partnering.

“There’s an alternative to the murderous Palestinian Authority, leaders who are interested in quiet and in coexistence and they are sitting here with us. The Trump program largely relies on the economic models developed in our industrial areas, and these are our natural partners for co-living here.”

Sheikh Abu Khalil Tamimi addressed the expected sovereignty and the Arab attitude to the issue: “I believe that sovereignty exists in the 1967 region and I think the situation must be dealt with through dialogue and promotion of coexistence. To stop the spread of hatred. For the average Palestinian, sovereignty is meaningless because Israel has been in control of Area C since 1967, so there’s nothing new here.

“Most Palestinians also want to live in peace, and to reach good political agreements and solutions as quickly as possible. This is what the average Palestinian thinks about the Deal of the Century and sovereignty. We want to get ready for the regional changes, to concentrate on economic cooperation also with the settlers, led by Yossi Dagan, we need to think together what our common future will look like.”

Sara Zoabi said at the event: “Thanks to Mr. Yossi Dagan for this initiative, which is important for cooperation between Palestinian and Israeli Arabs. I think the Deal of the Century is the right thing for Arabs and Israelis and I know that a large percentage of Palestinians are interested in the program and applying sovereignty, and even pray for it.”