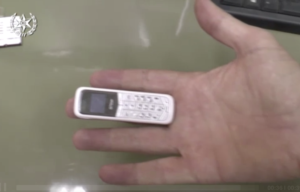 The security prisoner complained on Thursday morning that he was not feeling well due to medical problems he is suffering from. After an examination at the clinic of the detention center, it was decided to transfer him for a comprehensive examination at a hospital.

The intercepted phones that were smuggled. – Israel Prison Services spokesperson

Several hours later, a report was received from a security officer at the Barzilai Hospital in Ashkelon about the seizure of two suspicious packages in a restroom at one of the hospital’s imaging institutes.

The operation officer of the Shikma detention center joined the security officer of the hospital and the community policeman stationed there to check the contents of the parcels. They found two standard mobile phones, 17 SIM cards and five cell phone chargers.

An examination of footage from security cameras led them to a citizen who was caught on camera planting the devices at the hospital. That man, a resident of eastern Jerusalem, was apprehended by police and the security staff of the hospital, was detained and taken for further investigation by the Ashkelon Police.