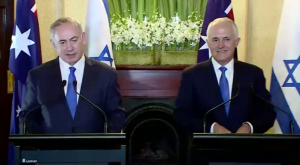 “I ask both former prime ministers to ask a simple question: What kind of state will it be that they are advocating? A state that calls for Israel’s destruction? A state whose territory will be used immediately for radical Islam?”

A final status arrangement, Netanyahu continued, must be based on direct negotiations, provide for Israeli security control over the area, and require of the Palestinian Authority full recognition of Israel as a Jewish state, a total rejection of anti-Israel incitement, and an end to calls for the dismantling of Israel.

Prime Minister Turnbull, who met with Netanyahu on Wednesday, published an article ahead of the Israeli leader’s visit, pledging his support for the two-state solution.

In the piece, Turnbull called for Israel and the Palestinian Authority to negotiate a final status agreement putting to the end of the conflict, “so that Palestinians will have their own state and the people of Israel can be secure within agreed borders.”